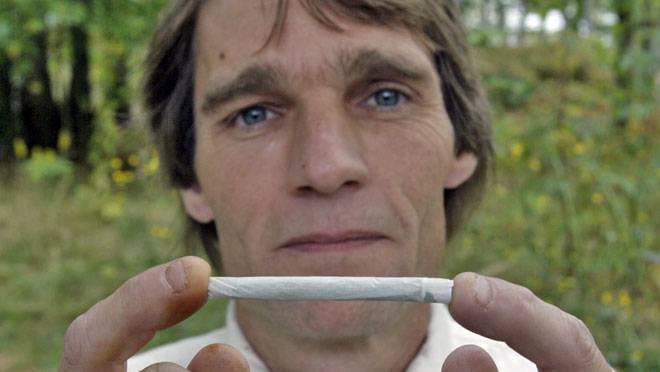 John Cook, the late co-founder and director of MUMM

Being from the Maritimes myself, I had always wanted to attend this festival. Well, just a few days before this year’s event, I coordinated with grower and competitor Ryan Adams to take the marathon 20-hour road trip together to check it out.

Early Thursday morning, Ryan picked me up and we began the beautiful but long trek to Canada’s East Coast. On our way, we made a quick stop in Quebec to visit CannaCopeia Consulting’s multiple award–winning grower Jose Dominguez. Though Jose has been my legal designate for many years, this was my first trip to visit the garden.

There is nothing like seeing “your girls” for the first time. Actually seeing the plants your medicine comes from is a spiritual commune with nature. Sadly, we visited at the wrong time to turn on the lights for photos. And we couldn’t wait; after an authentic Mexican lunch prepared by Jose, we had a long road trip ahead of us.

We arrived in Truro, NS on the Friday morning at 6:00 am after driving all night. So we hit a truck stop for a hearty breakfast of eggs, hash browns, toast, and “Newfie Steak” — fried bologna for the uninitiated — then headed to our motel.

I was surprised to arrive at the small local motel only to realize it was closed. Ryan has family in the Maritimes and I was born and raised on the East Coast, but I may have been immersed in Toronto’s big city 24/7 culture for too long. We couldn’t check in until the clerk arrived at 9:00 am.

Exhausted but with some time to kill, we made our way the 20 minutes from Truro to Riversdale. We found the festival space hosting Harvest Fest 2016 and the John Cook MUMMorial cup by following a gravel road onto the local farmer’s field provided for the event. We looked around briefly but didn’t want to rouse those already camped on-site. Instead, we drove back to the motel and waited until we could check into our respective rooms and finally sleep.

The theme for Harvest Fest 2016 was “Concentrating on Concentrates,” and featured demos on how to make hash, oil, and cannabutter.

After a solid nap, a shower, and a few joints we made our way back to the opening event. I was first struck by the number of campers already in attendance hours before the 7:00 pm start time. The perimeter of the field was filled with campervans, motor homes, and tents; a stage; glassblowing, vendor, and exhibitor areas; and even a dab bar.

In the centre were the usual port-a-johns, a fire pit, and command central of Harvest Fest 2016: the Maritimers United for Medical Marijuana booth manned by activist and coordinator-extraordinaire Debbie Stultz-Giffin.

Debbie is a well-known, revered medical-patients’ advocate who has provided patients with both general and court support. She has spoken on the issue of access not only with local politicians but at multiple speaking engagements in Ottawa. Specifically, she focused around patients’ rights to cannabis in all its forms in the Regina vs Smith case and patients’ rights to grow throughout the Allard case.

I highly recommend this festival as the best bang for your buck: $50 for a Harvest Fest 2016 judge’s pack. Yes, I said only fifty dollars. This is a smaller event so judges’ passes are limited and go quite quickly — buy one for next year now by contacting MUMM. Those that competed this year are already gearing up to either defend titles or beat down the champs, so the entries promise to be stellar in 2017. Attendance was also a bargain at $20 for the entire weekend.

The competition for the John Cook MUMMorial Cup 2016 was fierce.

The Wake N’ Bakery took second place in the edibles category with our pot Pixie Stix. Marcel Gignac took first for his amazing infused ice cream. (I’m coming for you and your ice cream next year, Marcel, you better bring your A-game!) And we barely beat my friend Jose from CannaCopeia with his MediWonkas in third.

First place in the Indica category and overall Best In Competition went to the Tahoe OG by my road-trip buddy Ryan Adams of St. Catherine’s, ON. Second went to Elephant Bud by Weed Woman (no relation) whom I didn’t get to meet, though I hope to next year. And CannaCopeia placed again, taking third for their Special Kush.

If you want to learn a lot, meet some wonderful East Coast folk, and sample some incredible cannabis products, this is the event for you. A perfect first cup for those who enjoy a more relaxed vibe … I hope to see you next year!